I wanted a blue Silkie hen and so I mentioned it on one of the chicken lists. Shortly thereafter, I got a note from a really nice guy up in Wisconsin saying he raised blue Silkies. He was sure he would have, in the not too distant future, one of pet quality.

A couple weeks later I got another message; he had just the Silkie for me and asked was I ready for her. My response was, "Is she on the plane yet?"

That evening a blue Silkie hen with a crooked toe was at the Post Office and ready to be travel overnight Express Mail. She will arrive the next day at my local post office. Ok, no problem, it's only 10 minutes to the post office, and I can have her home in a jiffy. I told my post office a live chicken will arrive the next day and asked them to call me when she arrives. The first express truck comes about 6:30 A.M. and the second at about 8:00 A.M.; she should be on one or the other of those.

I finally got another call from the post master about 10:30 saying the plane was in Indianapolis refueling and waiting for the fog to burn off so they could land at Greater Cincinnati. 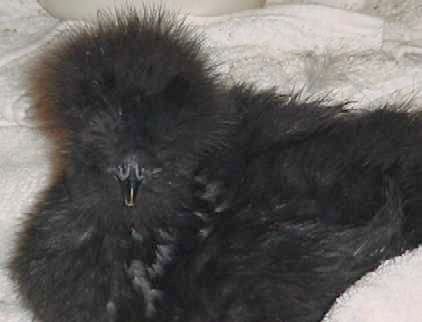 The post master started trying to track her down from the post office end, and I called Customer Service telling them what was going on and could they please find my chicken. They had absolutely no record of her after she left O'Hare Airport bound for Memphis (supposedly) which is the USPS hub in these parts. My Silkie was somewhere between Chicago and Memphis and no one knew where!

About 2:30 P.M. I received a call from the post office at Greater Cincinnati Airport telling me I had a chicken there and she would be delivered the next day unless I wanted to come and get her. Hecky, yes! I want to come and get her! I asked the guy how she got to Greater Cincinnati without going through Memphis. He told me she came in on a commercial flight instead of the mail run and had been there since sometime during the night!

I jumped in the van with some water and headed for the airport, which is about 40 miles away, on less than a quarter tank of gas and not a dime in my pocket. I made it to the airport in record time, picked up the little Silkie, opened her carrier and saw the most adorable little thing I'd ever seen in my life!

When I called the post master in town the next day to tell him the chicken was here, he said he had seen that I had picked her up. He also said that she had been transferred from the mail flight to a commercial flight which was coming straight in, and for that reason the Express Mail folks didn't know she was at the airport post office because she didn't go through the regular mail run and no one had notified anyone else that she was there and needed to be delivered. And that was why no one knew where she was!

I named her Gypsy because we only knew where she had started out from...we had no idea where she had been when she arrived here, and we still don't know.

Thank heavens, she's none the worse for wear from her ordeal, and seems to be very happy here. She's still settling in and seems to like the idea of having a big house around her! 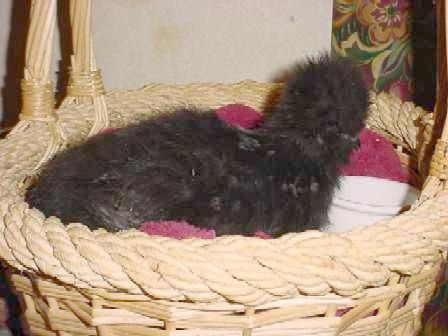