Mulberry Gets a Gold Star 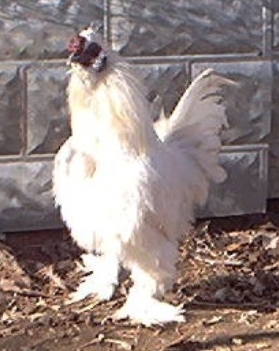 I was outside checking on my bantams tonight before closing them up in the henhouse, and I had been anxious about some babies that are just feathering out. They are not quite ready to brave the cold on their own yet, so every night I've been out there making sure that they are tucked in, as mom sometimes forgets to count them. Tonight mom had three of them under her wings, foster mom had one, and that left two unaccounted for. I noticed that Mulberry, one of the silkie roosters, was perched away from the others and looking kind of misshapened. I gently felt under him, and there were the two missing babies! Now Mulberry is not the best looking roo out there, and he's the beta roo, but he's always been solicitous to the moms and their babies, and tonight he gets a great big gold star!! What a guy! I know, he's not a housechicken, but he's such a sweetheart I just had to tell somebody.